Tantra & Vedas By Anil Vats ji
Best Tantrik Astrologer in India, Tantrik Remedies for All Problems in India, Tantrik Baba Ji in India, Tantrik Pandit Ji in India. The immense cultural and historical legacy of India is undeniable, yet perhaps the greatest achievements were made not so much in the physical, but in the spiritual sciences. One of the most important contributions of the Indian civilizations was the perfecting of the science of astrology, building on common astronomical concepts and creating one of the most advanced predictive models in history. The world famous astrologer Anil Vats ji continues this proud tradition, reconciling and refining ancient astrological practices into a single, universal predictive model.

A Tradition of Astrology
Astrology has played a vital role in Indian society since its inception. Kept alive and continuously refined by countless generations of sages, it is the best understood and most advanced system for identifying the influences of celestial bodies on the lives of humans we have. It also predicts future events. Astrology developed in multiple directions in India, accelerating this process. However, most will associate Hindu astrology with just one of its variants, Vedic astrology. Anil Vats ji firmly believes that focusing on just one of the many branches of the rich Indian astrology is too narrow a perspective. That�s why he has thoroughly researched its younger, though on less refined, brother, Tantric astrology.

Tantra and Vedas
The foundation of modern Hindu astrology lies in ancient religious texts passed from generation to generation. Key among these is Vedas, the largest body of text offering the theoretical basis not only for Hindu astrology, but also for the religious and social practices of India. By contrast, Tantra is a distinct and much younger body of teachings that has multiple facets, focusing on individual spirituality and transcendence, though impossible to classify as a religion or even a set system of beliefs. It is about actively seeking enlightenment. Vedas and Tantra are often perceived as permanently at odds, with many seeing any form of reconciliation impossible. However, Anil Vats ji found a way.

Reconciling the Impossible
Astrologer Anil Vats ji firmly believes that all teachings are a facet of the truth. Therefore, adopting a confrontational stance is not only unneeded, but also harmful, precluding any deeper understanding. A lifetime of research into the intricate mechanics of Hindu astrology provided him with insight into the underlying principles of this science, though finding common ground between Vedic and Tantric astrology was a daunting task. Through years & years of intense research, analysis, and calculations, Anil Vats ji found a solution. The idea became a concept, and the concept was transformed into a crucial element of his proprietary predictive model. This combination Tantric-Vedic astrology represents one of the life achievements of Anil Vats ji. He is not like other Tantriks who are misusing these occult sciences for their own Benefits & not for the welfare of human beings. He practices all the occult sciences in very scientific manner.

Now, He Wants to Help You
Anil Vats jis has a simple philosophy, one that guided him throughout his research efforts. He firmly believes in equality and wants to allow you to benefit from his achievement. That�s right. The world famous online astrologer Anil Vats ji wants to help you. As the foremost Tantric astrologer in India, he offers daily Tantric-Vedic horoscopes and astrological insights to you, using his proprietary predictive model. 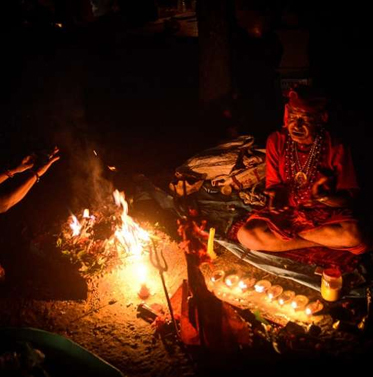